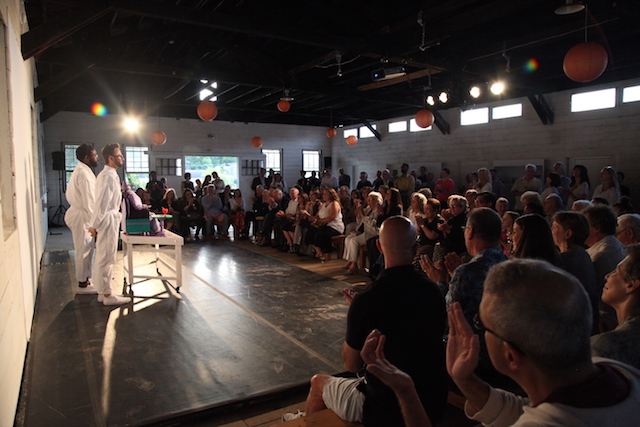 scene from Dan Hurlin’s puppetry ‘Demolishing Everything with Amazing Speed’

(CATSKILL, N.Y.) – Movement artists Dan Hurlin, Jodi Melnick, and Steven Reker performed at Lumberyard’s “End of Summer Shindig” at its newly purchased former lumberyard space in Catskill on Saturday, September 17. The event by Lumberyard, formerly known as American Dance Institute, provided a sneak peek into the work that the venue will showcase when it opens its doors in May 2018.

The event was catered by Catskill’s New York Restaurant; microbrews were provided by Cave Mountain Brewing Company; and local Bluegrass band Buckeye Rooster performed outside the venue as guests approached.

Lumberyard executive and artistic director Adrienne Willis noted, “We are thrilled to host receptions like this that help us continue to build relationships with the community and local businesses in and around Catskill as we look forward to opening what will become a nationally recognized residency and performance space.”

Designed by Hudson Valley based architect Richard Rothe of Rothe Engineering, Lumberyard will be located on the site of the former Dunn Builders Supply Complex. The renovation of the four-building complex will produce studios and housing, allowing the organization to expand its mission of supporting artists throughout the creative process by being able to increase the number of residencies and performance opportunities available to them. Lumberyard’s state-of-the-art flexible theater, designed by Christopher Buckley, is planned to become a cultural destination for Catskill residents and for those traveling to the region.