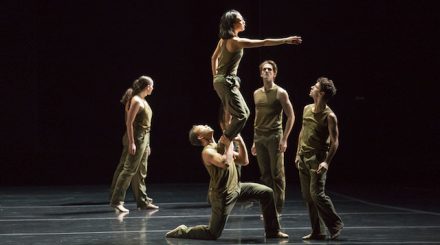 (BECKET, Mass.) – Jessica Lang Dance and Faye Driscoll and her ensemble are in residence at Jacob’s Pillow from Wednesday, July 5, through Sunday, July 9. Lang’s program includes “Glow,” a Pillow-commissioned world premiere; Driscoll’s is the first installment of a trilogy is performed in the round with an intimate number of audience members.

The New Yorker has called Jessica Lang “A prolific choreographer of skillfully constructed dances that respectfully mesh with music and striking visual design.” In addition to the Pillow-commissioned world premiere “Glow,” the program includes Lang’s “Thousand Yard Stare,” a dance embodying the incredible pride and honor as well as the searing loss experienced by military veterans. The program will also include the East Coast and company premiere of Lang’s “Lyric Pieces” as well as “Solo Bach,” “Sweet Silent Thought,” and “The Calling.” This season, the Pillow has formed a partnership with the Tanglewood Music Center, whereby Tanglewood Fellows and alumni will be providing the music accompaniment for this engagement.

New York Dance and Performance (“Bessie”) Award-winning choreographer Faye Driscoll is an alumna of The School at Jacob’s Pillow and “one of the most original talents on the contemporary dance scene” (Roslyn Sulcas, New York Times). Her ensemble work “Thank You for Coming: Attendance” is the first installment of a trilogy which softens the borders between artist and audience, making for an “unpredictable, funny, and endlessly entertaining” experience (Laura Molzahn, The Chicago Tribune). Driscoll’s work is rich, surprising, and deeply human. 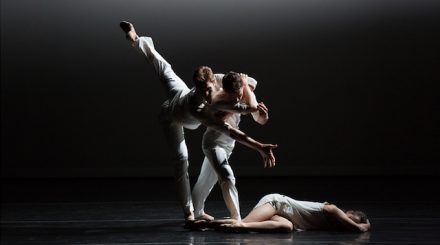 Created in 2016, “Sweet Silent Thought” is a work for four dancers, with a score by Polish musician and composer Jakub Ciupinski, featuring five Shakespearean sonnets. Alexandra Villarreal of The Huffington Post says the ballet “perfectly physicalized the sensations inspired by Shakespeare’s sonnets, transforming dance into poetry.”

Another recent work, “Thousand Yard Stare,” is the result of Lang’s interviews with veterans, therapists, and her research of PTSD. Michael Upchurch of the Seattle Times called the work “a masterpiece… a study in tight camaraderie and repeated loss…the connection between dancers—as between soldiers — couldn’t be more trusting or visceral.” The ballet is danced to Beethoven’s “Opus 132 (String Quartet #15),” performed live by a string quartet of Tanglewood alumni.

The program also includes “Glow,” the world premiere commissioned by Jacob’s Pillow, an athletic, whimsical work for dancers donning sneakers and performing against an array of neon light designed by Nicole Pearce, with music composed by percussionists Owen Clayton Condon and Ivan Trevino.

The captivating solo “The Calling” is performed in a huge, stage-wide skirt designed by Elena Comendador. Originally premiered by Ailey II in 2006 and danced to music by Norwegian vocal ensemble Trio Mediaeval, the solo has been called “A heavenly ballet … the beautiful movements seamlessly moved from the long and lyrical to urging and angular, leaving the audience completely mesmerized” (Gina Miles, Bermuda Sun).

“Lyric Pieces,” a work for four men and four women, premiered in 2012 by the Birmingham Royal Ballet. The score, by Norwegian composer and pianist Edvard Grieg, will be performed live by Tanglewood Fellow Michael James Smith. The set design — huge rolls and fans of paper that are folded and unfolded by the dancers — was created by Molo Designers and frequent JLD collaborators Stephanie Forsythe and Todd MacAllen.

Jessica Lang is a choreographer and the Artistic Director of Jessica Lang Dance. Lang, a recipient of a 2014 Bessie Award and 2017 Arison Award, has created more than 95 works on companies worldwide since 1999 including American Ballet Theatre, Pacific Northwest Ballet, Birmingham Royal Ballet, the National Ballet of Japan, and Joffrey Ballet, among many others. Lang made her opera directorial debut creating Pergolesi’s Stabat Mater at the 2013 Glimmerglass Opera Festival.

In 2016, she choreographed San Francisco Opera’s production of Aida, directed by Francesca Zambello, which will be performed by Washington National Opera and Seattle Opera in the 2017/18 season. She was a 2015 New York City Center Fellow and a 2016 Fellow at the NYU Center for Ballet and the Arts. In 2017, Lang is the Emerging Movement Artist in Residence for Dance Films Association.

Jessica Lang first appeared at Jacob’s Pillow as a company member in Twyla Tharp’s company THARP! in 1998. Jessica Lang Dance made its official company debut at the Pillow in 2012 in the Doris Duke Theatre and the company returned in 2013 and 2015 for a two-week run. Pacific Northwest Ballet and Jacob’s Pillow co-commissioned Lang’s “Her Door to the Sky,” which the company premiered at the Festival in 2016.

Jessica Lang was a guest choreographer for the Ballet Program of The School at Jacob’s Pillow in 2014, and created a work which premiered at the 2014 Season Opening Gala. Lang’s evening-length work The Wanderer was created during a Creative Development Residency at the Pillow in the fall of 2014. 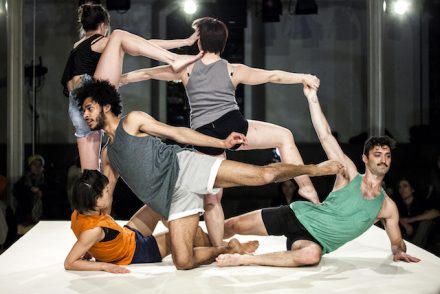 Faye Driscoll, Thank You For Coming

Faye Driscoll’s “Thank You For Coming” is a series of works in which Driscoll extends the sphere of influence of performance to create a communal space where the co-emergent social moment is questioned, heightened, and palpable. Through each distinct iteration Driscoll is asking: How do we perceive ourselves as participants in the co-creation of our reality, and through performance can we collectively create a new vision of society?

In “Thank You For Coming: Attendance,” the premiere iteration in Driscoll’s three-part series, performers pass through ever-morphing states of physical entanglement and scenes of distorted familiarity, building new bodies, new stories, and new ways of being around a constantly constructed and re-imagined group experience.

Intimately staged in the round, Driscoll crafts a heightened reality of observation, invitation and interdependence. As audience and performers increasingly find themselves becoming one, a beautiful and chaotic shared identity emerges, culminating in a dynamic ritual of action and transformation. 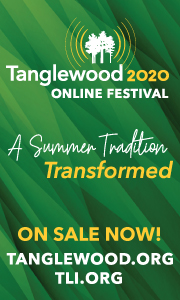