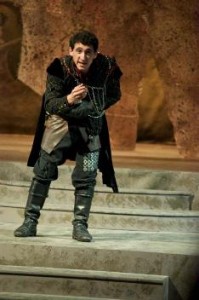 (Lenox, Mass.) – Shakespeare & Company’s 23rd annual Fall Festival of Shakespeare, engaging over 500 students annually through the transformative power of Shakespeare’s words in vibrant, playful, and poignant theatrical experiences which culminate in a four-day mini-marathon of 10 Shakespeare plays, takes place today through Sunday, November 20, 2011, at the company’s Founder’s Theatre in Lenox.

This year’s festival is being dedicated to the memory of the theater compnay’s longtime friend and supporter, trustee Elayne P. Bernstein, who passed away on October 4, 2011. Bernstein was the company’s most vocal and eloquent advocate of its education programs, and her support and dedication helped bring them to the forefront of the community’s awareness. Bernstein never missed a festival in the 23 years it has been in existence.

“If we can get the kids inspired early on, it will stay with them all their lives,” said Ms. Bernstein.  Over the years, she contributed substantial funds toward the company’s nationally acclaimed and award-winning Education Programs, and her own grandchildren participated in the Riotous Youth summer sessions. Bernstein constantly encouraged everyone she knew, including board members, community members, family and friends, to support the programs and to personally attend the program’s performances like the Fall Festival of Shakespeare and the Riotous Youth presentations.

Led by Director of Education Kevin Coleman, Associate Director of Education Jenna Ware, and School Programs Manager Alexandra Lincoln, the Fall Festival is a celebration rather than a competition. Students are encouraged to delve into Shakespeare’s works, unpacking the language and savoring the humor, intensity and transcendent beauty of plays written over 400 years ago. Daily rehearsals focus on students’ personal responses to the text, creating the possibility for a personal connection to language that students previously may have written off as inaccessible. Students also learn stage combat, technical theatre, stage management, publicity techniques, and dance during their Festival experience. 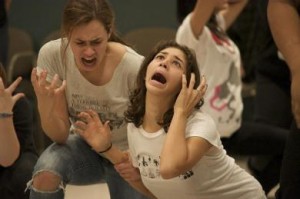 “I believe we take into our hearts those people who awaken in us a glimpse of what is divine,” said Kevin G. Coleman, Director of Education.  “I believe there is a place in our hearts that is made to hold and cherish these rarest of people. I believe these people often change us forever, change us for the better.  I believe that, for so many, many people, this was – and continues to be – Elayne.” 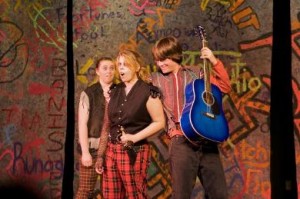 Shakespeare & Company is home to one of the most extensive theatre-in-education programs anywhere.  Since 1978, Shakespeare & Company’s Education Program has reached over one million students through innovative performances, workshops, and residencies. It was the subject of an in-depth, two-year study by Harvard University’s Project Zero, which recommended national replication.  In 2006, the Education Program received the prestigious Coming Up Taller Award presented by First Lady Laura Bush at the White House, and in 2005 it received the Commonwealth Award, the highest award for excellence in the arts, sciences and humanities given by the State of Massachusetts.  The Education Program has been identified by the Arts Education Partnership and the President’s Committee on the Arts and the Humanities as a “Champion of Change,” and is recognized as an innovative leader in the field of arts education.

Founders’ Theatre is located at the Company’s 70 Kemble Street campus in Lenox, and is wheelchair accessible.  Tickets are $12.00 for adults and $6.00 for students per performance. A Festival Pass, which includes all ten plays, may also be purchased for $60.00 for adults and $30.00 for students. For tickets please call the Box Office at (413) 637-3353 or visit the website at Shakespeare & Company.