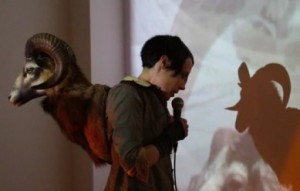 (NORTH ADAMS, Mass.) – C. Ryder Cooley will bring her fully staged “extinction” cabaret XMALIA to the Venable Gym at Massachusetts College of Liberal Arts (MCLA) as part of the MCLA Presents! series on Wednesday, January 25, 2012, at 7:30 p.m. The 70-minute show will feature a series of musical vignettes about vanished creatures as told by a lonely musician – played by Cooley – who “summons” extinct animals back to life. Musical instruments in the performance include a six-string ukulele and singing saw, autoharp, electric guitar, upright bass and percussion.

XMALIA is the second performance in Cooley’s ongoing series called Animalia, which was presented at MCLA two years ago.  XMALIA is a multi-media performance that combines live and recorded music, taxidermy, video projections, and aerial and ground-based movement.

“I want people to be entertained and feel they’ve been somewhere,” Cooley says. “I also want them to walk away feeling concerned and to think about what we’re doing to our planet and the other species with which we co-exist.”

XMALIA is the second performance in Cooley’s ongoing Animalia series. The first in the series, Stories of Collapse, Calamity and Departure, invoked visions of human-animal relations, secret bee societies and haunted circus scenes. These performances, held in 2008-2009, were at numerous festivals and venues across the United States.

The Animalia-Xmalia series has been developed with support from NYFA, NYSCA, Robert Wilson’s Watermill Center, MacDowell Colony and Yaddo. XMALIA is co-presented by 2440 Design Studio.

Cooley received a BFA from the Rhode Island School of Design in Sculpture and an MFA in integrated electronic arts at Rensselaer Polytechnic Institute. In early 1993, she moved to San Francisco, Calif., and became an active member of the local art and music scenes. She has performed and collaborated with several bands including Fall Harbor, the Jug Stompers, the Darklings, Corner Tour and DownRiver.

Cooley is based in Hudson, N.Y.

Tickets to XMALIA are $10 for general admission. Tickets for MCLA alumni are $8; $5 for staff and faculty; and members and students are free. Tickets may be reserved by calling MCLA Presents! at (413) 662-5204.

MCLA Presents! is a program of MCLA’s Berkshire Cultural Resource Center (BCRC), a collaborative project with Massachusetts Museum of Contemporary Art (MASS MoCA) and the City of North Adams. The BCRC provides professional development training, resources and support to the artists, art managers and creative workers of Berkshire County.