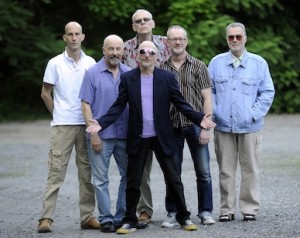 Graham Parker and the Rumour

(POUGHKEEPSIE, N.Y.) – New wave/pub-rock legend Graham Parker has reunited his original band, the Rumour, and performs with all six original members on Sunday, November 25, 2012, at 7pm at the Bardavon Opera House in Poughkeepsie, N.Y.  When Parker first hit the scene in the late 1970s, he was touted as a peer of Elvis Costello and an heir apparent of Bruce Springsteen and Van Morrison. The Figgs, who have toured with Parker as his backup band in recent years, will be opening the show.

For over 30 years, British rocker Graham Parker has been slinging a signature sound across continents and airwaves that rightly earned him a spot in the pantheon of truly original and influential figures in rock and roll. Since his early days with his band the Rumour (with whom he has two albums in Rolling Stone’s “Top 100 Albums of All Time”), Parker has coupled punk’s energy with his deeply rooted love of American R&B, country and soul music. He’s got a snotty barroom brawler’s rasp and sneer, a soulman’s swagger and an ear for indelible hooks and pop songcraft.

Parker and the Rumour’s 1980 split followed a run of well-received albums produced by Nick Lowe among others. In the years since, Parker has released numerous albums and performs regularly. After writing and demoing the songs that would become his next album, Parker reunited his original band the Rumour for their first album together in 31 years, Three Chords Good, out November 20 via Primary Wave Records.

Produced by Dave Cook and Graham Parker, the collection’s twelve original tracks of driving and confessional rock and roll were recorded in upstate New York and feature the classic Rumour line-up of Brinsley Schwarz and Martin Belmont on guitars, Steve Goulding on drums, Andrew Bodnar on bass and Bob Andrews on keyboards. “After a hiatus of over 30 years, it was extraordinary to hear the Rumour backing my material again,” says Parker. “We’ve finally made an album of true musical collaboration that we’re all very proud of.”

The release comes in the middle of a busy time for Parker. After first contacting the band to re-form in May 2011, Parker and the Rumour were done recording by mid-July.

Coincidentally, just as reunion plans were being set, writer/director/producer Judd Apatow approached Parker, offering a role in his new film, This Is 40, an original comedy that expands upon the story of Pete (Paul Rudd) and Debbie (Leslie Mann) from the blockbuster hit Knocked Up as we see first-hand how they are dealing with their current state of life. The now-finished film will be released on December 21, 2012, and features Parker, as himself, performing in a duo (with Tom Freund) and with the Rumour. “Getting to film Graham Parker and the Rumour’s first performance in 30 years was one of the highlights of my career,” says Apatow. “They rocked hard, and I must say Graham Parker as an actor is really funny.”

A second film, Don’t Ask Me Questions, a documentary on Parker by the Gramaglia Brothers (End Of The Century: The Story Of The Ramones), has been in the works for over ten years and captures the recording of Three Chords Good and Parker and the Rumour on the set of This is 40 in Hollywood. The documentary’s release date is not yet confirmed.

Tickets are $43 Adults, $38 Members, and are available through:

To raise critical funds in support of two community groups who feed the hungry, the Bardavon will solicit donations directly from their Bardavon and Ulster Performing Arts Center (UPAC) audiences at every event in November and December. Funds raised will be split between Beverly Close Memorial Food Pantry in Poughkeepsie www.dutchessoutreach.org, and the Queens Galley in Kingston www.queensgalley.org.

The Beverly Close Memorial Food Pantry is part of the Dutchess Outreach program and is an emergency food bank which provides clients with up to three days of food in times of need. Queens Galley is a Kingston-based nonprofit organization that provides awareness, education, relief and prevention of food insecurity. Three years ago, Queens Galley Executive Director Diane Reeder and UPAC Operations Manager Ila Carnes created the concept of Dinner & Show – Just $3. “People don’t realize that for as little as $3 we are able to feed one person a dinner at the soup kitchen,” points out Ms. Reeder.  Dutchess Outreach Administrator Carol Hegener praised the initiative and remarked, “Those we serve are thrilled!”