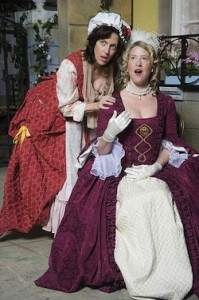 Playwright David Ives (Venus in Fur, All in the Timing) was on hand during the first week of rehearsals. Ives was also present for rehearsals and the reading of The Liar at Shakespeare & Company in 2011 as part of the Company’s Studio Festival of Plays.

“We did a reading of The Liar at Shakespeare & Company a few years ago in their play reading series and I’m looking forward to having it in their winter season,” says Ives. “To be part of the rehearsal process, to be in the room in the early days of rehearsals working with the director and actors is something I very much enjoy. Hopefully this will be the first of many more collaborations with the company.”

The Liar was originally penned by 17th-century playwright Pierre Corneille. This translation by award-winning American playwright David Ives merges the iambic humor of classic verse with a contemporary twist. This production of The Liar reunites several of the stellar cast members from last winter’s The Learned Ladies, including Dana Harrison, Alexandra Lincoln, and Enrico Spada. The lead role of Dorante is played by David Joseph, who was last seen in the summer’s sold-out run of The Tempest featuring Olympia Dukakis.

David Ives gained international fame by penning one-act comedies including All in the Timing and Time Flies. His most recent hit, Venus and Fur, garnered Nina Arianda a Tony Award for Best Leading Actress in a Play. All in the Timing celebrates its 20th anniversary this January with a revival at Primary Stages in New York. 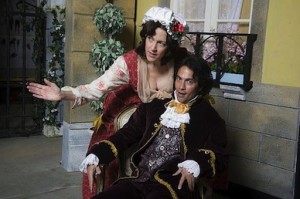 Ives describes his method of adaptation thusly: “My version of the play is what I call a translaptation, i.e., a translation with a heavy dose of adaptation. For what I have realized in translating plays is that, in an odd way, the language of a play is of secondary concern… In the end, I did to The Liar what Corneille had done to his Spanish source: I ran with it. The truth, the whole truth and nothing but the truth, as refracted in a theatrical fun-house mirror.”

Tickets are $15-$50, and Shakespeare & Company offers a wide range of discount options, including discounts for groups, students, senior citizens, military, teachers and our very popular 40% Berkshire Resident Discount. To view a complete schedule, receive a brochure, or inquire about discounts, please call the Box Office at 413.637.3353 or visit Shakespeare & Company. Back by popular demand, Shakespeare & Company’s annual Valentine’s Day Brunch will return on Sunday, February.