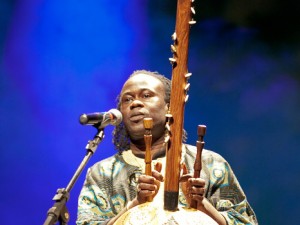 (CHATHAM, N.Y.) – Senegalese vocalist, oral historian and master kora player Zal Idrissa Sissokho and his band Buntalo will perform an evening of West African music on Saturday, June 22, 2013, at 7:30pm, at PS21: Performance Spaces for the 21st Century, located at 2980 Route 66 in Chatham. The concert will begin at 7:30pm.

The music of Zal Idrissa Sissokho and Buntalo is called Afro-manlinke. It is a mix of traditional and modern world music, both festive and reflective. It is music for both dancing and listening. At its core is the sound of the kora, a 21-stringed harp-lute. While its sound resembles that of a harp, when played in the traditional style it bears a closer resemblance to blues guitar. Kora players have traditionally come from griot families, who are, essentially, walking history books. Griots preserve ancient stories and traditions through song and their inherited tradition is passed down through generations.

Zal Idrissa Sissokho is no exception. The Sissokho family is among the greatest representatives of the griots. “Many of my family members, as my father, tour all over the world to share our traditional music,” says Sissokho.

In his homeland of Dakar, Zal Idrissa Sissokho learned the oral and musical traditions from his father. Sissokho also sang and composed songs inspired by the West African repertoire. In the late 1990s he moved to Canada and in 2004 he founded his group, Buntalo.

Today the group’s repertoire consists of classical pieces sung in Malinké and Wolof, as well as original contemporary creations which preserve their centuries-old identity. “Since the ‘70s African musicians have been giving and taking from modern music,” says Sissokho. “Even though kora is an old instrument, it has the faculty to mix up with almost all musical styles. My band Buntalo and I have this mission, to make possible the mix of traditional and modern music.”

Zal Idrissa Sissokho and Buntalo is the second performance in PS21’s “String Concert Series,” which features three exceptionally accomplished string players from diverse musical and cultural traditions. The final concert in this series features Tony Trischka Territory on June 29. Tony Trischka is perhaps the most influential banjo player in the roots music world. For more than 35 years, his stylings have inspired a whole generation of bluegrass and acoustic musicians. This project has been supported by a grant from the Fund for Columbia County, a fund of Berkshire Taconic Community Foundation.

PS21: Performance Spaces for the 21st Century is a not-for-profit organization in Chatham, NY, dedicated to the performing arts and to serving a diverse community with concerts, programs and residencies by professional artists and ensembles, youth and children’s programming and cultural education opportunities for all ages.