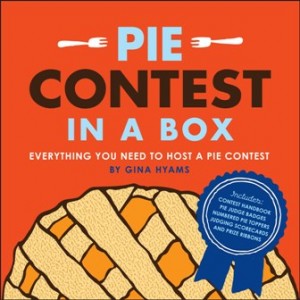 Pie Contest in a Box by Gina Hyams

(GREAT BARRINGTON, Mass.) – Housatonic-based writer Gina Hyams will host the WBCR-lp Anything Goes Pie Contest to celebrate publication of her new book/kit, Pie Contest in a Box: Everything You Need to Host a Pie Contest, on Sunday, July 10 at 3 at Route 7 Grill (999 Main Street in Great Barrington, Mass.). Admission is $5 to $10 sliding scale (no one turned away for lack of funds). Proceeds from this event will benefit WBCR-lp Berkshire Community Radio.

“Pie and community radio are similar in that they both bring people together,” said Hyams. “We may fight about politics and religion, but pretty much everybody agrees that pie is good.” Anyone can enter any kind of pie that they like: homemade pie, semi-homemade pie (store-bought crust OK), farmers’ market pie, family heirloom recipe pie, vegan pie, booze pie, or any other sort of pie they can imagine. In the freewheeling spirit of community radio, everyone who attends this pie contest will get to sample pies and vote for the best one. Winners will be awarded prize ribbons and one-of-a-kind aprons donated by Moho Designs. 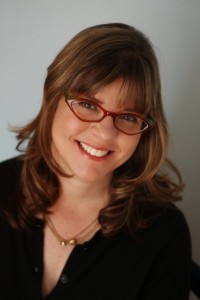 Gina Hyams, author of "Pie Contest in a Box" (photo by Peter Boyce)

Hyams has published eight books on family traditions, travel, and the arts and she served as a judge last year at the American Pie Council Crisco National Pie Championships. Her Pie Contest in a Box (Andrews McMeel Publishing, June 28, 2011, $15) includes everything needed to host the contest, except the pie. There’s a pie contest handbook, which orients contestants and judges to the history of pie, discusses why pie matters, outlines different categories of pie and official judging criteria, and includes prize-winning recipes. The box also contains essential pie contest tools, including 12 pie toppers, 60 scorecards, five judge ribbons, and four prize ribbons (1st, 2nd, 3rd, and People’s Choice).

Founded in 2004, WBCR-lp, 97.7 FM is a volunteer-operated and listener-supported noncommercial community broadcast and Internet radio station in the town of Great Barrington, Mass. Each week, WBCR-LP broadcasts over 90 locally-produced or sponsored radio programs. Programmers range from elementary school students to retirees; topics include local community issues, astrology, skateboarding, women’s issues, and water preservation and protection, as well as live and recorded music ranging from classical to Italian folk to heavy metal. For more information about the station, visit WBCR-lp.

To enter the pie contest, send an e-mail to pietakesthecake@gmail.com that includes your name, the type of pie(s) you’ll be entering, and your phone number. You will then need to drop off your pie with a serving implement at 2 on the day of the contest at Route 7 Grill. For more information, call Gina at 413.464.2851.