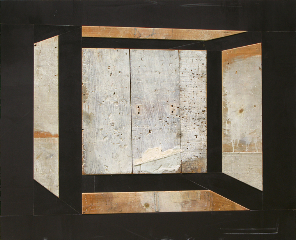 A recent piece by Michael Zelehoski

(GREAT BARRINGTON, Mass.) – “Inner Objects,” an exhibition of works by Michael Zelehoski, opens on Friday, August 19, at Sanford Smith Fine Art and runs through October 13, 2011. A reception for the artist takes place on Saturday, August 20, from 4 to 7.

Zelehoski’s artwork involves the literal collapse of three-dimensional objects and structures into the picture plane. This simple gesture – which is basically just taking things apart and putting them back together flat – is at the heart of what we think of as two-dimensional, representational art.

Zelehoski works almost exclusively with found, utilitarian objects such as shipping pallets and boxes, deconstructing the objects, cutting them into sometimes hundreds of abstract fragments before reassembling the pieces two-dimensionally. The negative space is filled with carefully fitted pieces of wood, creating a solid plane in which the object is trapped in a parody of its former perspective. The object’s concreteness is in direct contrast to the spatial illusionism of its composition, not to mention the perceived autonomy of the picture plane.

“By unifying the picture plane and the spatial environment,” says Zelehoski, whose formal training took place at Bard College at Simon’s Rock where he earned his Associates Degree in art, followed by the completion of his Bachelor’s Degree at the Universidad Finis Terrae in Santiago, Chile in 2003, “I’m trying to reconcile the dichotomy between pictorial and physical space, art and object, sculpture and painting.” 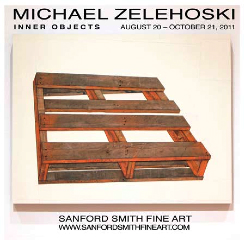 Zelehoski’s works are three-dimensional objects in two-dimensional space and although they find themselves trapped, unable to perform their original functions, they remain active and productive on the level of our experience. These objects, which have always been thought of as means to other ends, have become ends in themselves.

Zelehoski has had solo shows in Miami and New York. Zelehoski has received a variety of awards and grants, including a Massachusetts Cultural Council Fellowship and the Artslant’s Golden Frame Award. His work was displayed at Ferrin Gallery in 2009 and Berkshire Museum in 2008.
Sanford Smith Fine Art
13 Railroad St
Great Barrington, Mass.
413-528-6777