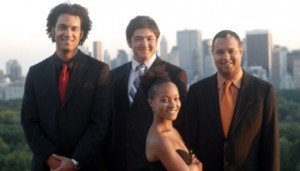 (NEW LEBANON, N.Y.) – The Harlem Quartet will be joined by pianist Misha Dichter and cellist Dane Johansen on Saturday, September 16, at 6pm, for the 7th and final concert of the 2011 season of Concerts at Tannery Pond, located in the barn at Darrow School. The season finale will feature works by Mozart, Schubert, and Schumann.

The Harlem Quartet is currently the resident ensemble in the New England Conservatory of Music’s Professional String Quartet Program. Its mission is to advance diversity in classical music while engaging young and new audiences through the discovery and presentation of varied repertoire, highlighting works by minority composers.

The quartet has played two performances at the White House for guests of President Obama and First Lady Michelle Obama, and made an appearance on Christmas morning on NBC’s Today Show. In 2009 the quartet also performed by invitation with Itzhak Perlman at the Metropolitan Museum of Art and made its London debut performing at the residence of the US ambassador to the United Kingdom.

The Harlem Quartet made its acclaimed Carnegie Hall debut in the fall of 2006 at the Sphinx Organization’s 10th anniversary gala concert. They have returned to Carnegie on numerous occasions, including a performance in late January 2007 as participants in Arts Presenters’ prestigious and highly competitive Young Performers Career Advancement (YPCA) program and an October 2008 appearance with Paul Katz at the annual Sphinx gala. In 2006 it made its debut at Harlem’s legendary Apollo Theatre with a well-received performance of Wynton Marsalis’s At the Octoroon Balls. In collaboration with cellist Carter Brey, it performed in December 2008 at the Library of Congress in a concert employing the Library’s matched collection of Stradivari instruments and including Schubert’s Cello Quintet.

Each member of the Harlem Quartet is a seasoned solo artist, having appeared with the New York Philharmonic, the Boston Pops, and the Atlanta, Baltimore, Cleveland, Detroit, National, New World, and Pittsburgh symphony orchestras, among others. As a quartet, they have performed in many communities across the country including Detroit, New York, Los Angeles, Atlanta, and Boston.

Misha Dichter has had an illustrious international career and in 2009, he appeared with his wife Cipa at Tannery Pond for a two-piano concert. Dane Johansen, cellist, joined the Escher String Quartet in May 2010 and is currently enrolled in The Juilliard prestigious Artists Diploma program.