(PITTSFIELD, Mass.) — Tom Patti, the Pittsfield-based artist internationally renowned for his innovative work in glass, has been commissioned by Berkshire Museum to create original works for the museum’s entry vestibule and lobby area. The site-specific installations are the first major commissions by Patti, one of the most influential and inventive artists working with glass, for a public building in the Berkshires. Museum visitors will be able to view the new works beginning Saturday, June 30, 2012, when the museum will be open and free to the public all day. A gala celebration of Patti and his accomplishments will be held Friday evening, June 29, 2012.

On Saturday, June 30, the Opening Day Celebration of Tom Patti and the museum’s new installation begins at 10 a.m. with a welcome and remarks from the museum’s executive director Van Shields. At 11 a.m. Tom Patti will give a talk in the museum’s theater, to be followed at noon by a booksigning. Tom Patti: Illuminating the Invisible by William Warmus and Donald Kuspit will be available for purchase. At 1 p.m., cake and lemonade will be served. Admission is free all day, from 10 a.m. to 5 p.m.

Tom Patti has long been regarded as one of the most influential and inventive artists working with glass. His artwork, often made up of transparent cross-sections that capture simple, elegant shapes and produce shifting layers of color, reflects the artist’s multidisciplinary philosophy, encompassing science and technology as well as architecture, design, and even engineering.

It is particularly appropriate that works by this acclaimed artist will be installed at the museum, to be enjoyed by every visitor who comes through the doors. Tom Patti, a Pittsfield native who still maintains his studio in the city, spent a considerable amount of time at Berkshire Museum as a boy; today, visitors can hear and see Patti commenting on creativity in the video that is part of the exhibition in the Feigenbaum Hall of Innovation. Three glass sculptures by Patti, dating from 1976 to 1979, are part of Berkshire Museum’s permanent collections.

As well, it is particularly appropriate that this major commission is installed at the museum in 2012; this year marks the 50th anniversary of the Studio Glass Movement, to which Tom Patti has made significant contributions.

“Berkshire Museum has long held an important place in my career,” says Tom Patti. “Growing up in Pittsfield, wandering the Berkshire Museum’s galleries afforded a world of discovery in natural history, science, and fine art. It was an environment that I wanted to be a part of. It served my imagination as a child without it ever occurring to me that I would become an artist. Those early explorations still inspire me, and it would be wonderful if my work offers that kind of inspiration to today’s young people when they visit the museum.” 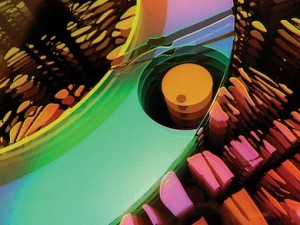 “Celebrated throughout the art world for his excellence as an artist and innovator in materials and technology, Tom Patti will forever be recognized in the annals of art history,” says Van Shields, executive director. “Considering our mission to make inspiring, educational connections among art, history, and natural science, we are honored to have Tom Patti’s work become an integral part of the Berkshire Museum.”

Funding for this commission comes from the Florence Keep and Josephine Crane Fund, created to provide for the development and care of the museum’s collections.

“Tom Patti’s work is boundary-breaking, innovative, experimental, and compelling,” says Maria Mingalone, Berkshire Museum’s director of interpretation and curator of Echoes in Space. “His working style has been informed by the kind of experimentation and inquiry that is found in the field of science as much as it is in the artist’s studio. He continues to create new ways of working with his medium, glass, a material that has been around for millennia.”

Tom Patti, who was born and raised in Pittsfield, holds both a bachelor’s and master’s degree in industrial design from Pratt Institute. Having received international recognition for his small-scale sculpture and large architectural art commissions, he was chosen in 1987 as a Massachusetts Living Treasure by the Foundation on the Arts. His work is represented in the permanent collections of the Museum of Modern Art and the Metropolitan Museum of Art in New York City; the National Museum of American Art in Washington D.C.; the Corning Museum of Glass in Corning, N.Y.; the Victoria and Albert Museum in London; the Louvre in Paris; and numerous other important institutions.

In the 1960s, Patti was involved with a project co-founded by Robert Rauschenberg called EAT (Experiments in Art and Technology), intended to promote collaboration between artists and engineers. At this time Patti became interested in the potential of glass for its sculptural possibilities, integrating design imperatives with techniques of fusing and laminating, developing materials suitable for art, industrial, and architectural application. In 1982, he worked with Dan Fox, the inventor of Lexan plastic, on a site-specific commission for General Electric Plastics World Headquarters, which is now in the collection of the Houston Museum of Fine Arts.

Patti collaborated with architect Cesar Pelli on a commission for the Owens-Corning World Headquarters in Toledo, Ohio, in 1994. He then created projects for two museums: Spectral Boundary for the Mint Museum of Craft and Design in Charlotte, North Carolina, and Spectral-Luma Ellipse for the Museum of Fine Arts in Boston. In 2004, Night Passage was completed for the intermodal station in Queens, New York. Skillfully integrated into the main curved glass wall of the station and viewed daily by more than two million people, it is considered one of the most successful commissions by MTA Arts in Transit. The next year, Light Monitor was completed for Morton Square, a block of high-end residences, in Greenwich Village, N.Y.

For the Eric Carle Museum of Picture Book Art in Amherst, Mass., in 2006 Patti created Tome, and in 2007, the very large-scale Flight Dialogue, more than 300 feet in length, was completed for the Charlotte-Douglas International Airport in North Carolina. Most recently, a constantly changing sculptural façade inspired by Florida’s sultry, tropical atmosphere titled Miami Rain, was installed on a fourteen-story parking garage at the Marquis building in Miami in 2010.

Berkshire Museum is open Monday through Saturday from 10 a.m. to 5 p.m. and Sunday noon to 5 p.m. Museum admission is $13 for adults and $6 for children. Members and children aged three and under enjoy free admission.

The Museum is located at 39 South Street on Route 7 in downtown Pittsfield. Berkshire Museum is the first public museum in Berkshire County, established by Zenas Crane in 1903 as a museum of art and natural history. Little Cinema is open year-round. Feigenbaum Hall of Innovation, Aquarium, Alexander Calder Gallery, and other exhibits are ongoing.