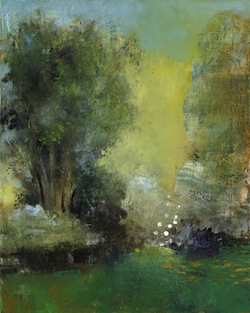 (PITTSFIELD, Mass.) – The Starry Outpost, a collection of new paintings and drawings by Maggie Mailer that expands the narratives of her two previous bodies of work, The Volcano Sitters and The Balloonists, opens with a reception at Ferrin Gallery on Saturday, August 4, 2012, from 4 to 6 pm, and runs through September 2. Part of ArtBerkshire’s COVET project, in which new works relate to artworks found in the region’s museum collections, the new series depicts locations, characters, maps, and plots that present a constellation of facts and images which form the foundation for an imaginary novel.

Mailer is also the featured artist in an iCovet event on Wednesday, August 15, 7-8 pm, in conversation with Berkshire Museum director of interpretation Maria Mingalone, about how history informs contemporary art practice and Mailer’s use of museum painting collections in her recent artwork produced for COVET. Mailer’s solo exhibition, The Starry Outpost features paintings based on observations of 18th century landscape and portraiture in collections of The Clark in Williamstown and Berkshire Museum in Pittsfield. The conversation will be moderated by Seth Rogovoy, editor of the Rogovoy Report, a media sponsor of the COVET project.

The Starry Outpost narrative’s current incarnation presents a group of 18th century aristocrats and end-time enthusiasts who prepare for their final moment by frolicking in regal gardens, awaiting deliverance to a distant star paradise called The Starry Outpost. There, a mythical city runs on the imaginary energy of Tantric Beings and embraces those in transit from one life to the next. The spiritually ready are instructed in the art of building their own reality, while the egotistically inclined are relegated to a false paradise in the region of The Empty Water Bodies of the Moon.

The story’s protagonist is a member of this latter group, an architect who has lost his memory in the passage between worlds, and devotes himself to building a palace which will hold his retrieved memories. His secretary and secret love is a starry eyed painter, who records everything in paint, in hopes of mapping a way back to The Starry Outpost.

Mailer, the daughter of author Norman Mailer and jazz singer Carol Stevens, is one of the region’s well-known contemporary artists. After graduate school, she returned to Pittsfield and established her studio in a vacant storefront on North Street; a number of other artists followed suit. In 2003 she created the Storefront Artist Project and became an early contributor to the revitalization of Pittsfield. This is her fifth solo exhibition at Ferrin Gallery.

ABOUT COVET: a series of exhibitions and programs presenting contemporary objects and fine art in all media including design, sculpture, painting, photography, prints, works on paper.   COVET is based on contemporary artists creating new works in response to historical artworks in museum collections.  COVET: Art + Objects, the group exhibition of works in all media, is on view at the gallery in Pittsfield through September 2.

In addition to the exhibitions taking place at Ferrin Gallery, COVET will be the theme for the 2012 ArtBerkshires summer program taking place in the Berkshires of Western Massachusetts, July 19 – August 5.  Organized by ArtBerkshires, a collaboration between gallerists Sienna Patti and Leslie Ferrin, the COVET program involves curated itineraries and behind-the-scenes tours of museums, studios and gallery shows related to the project.  During the two weeks of programming, artists, curators and collectors are brought together in the galleries and through the tours, special talk, and Dish + Dine evenings.

FERRIN GALLERY, established 1979, is nationally known as a contemporary gallery specializing in figural sculpture and studio ceramics. The gallery works closely with private collectors, institutions, and the media as a source for works by both established and emerging artists. Located in the Berkshires of Massachusetts, it is equidistant from New York City and Boston.