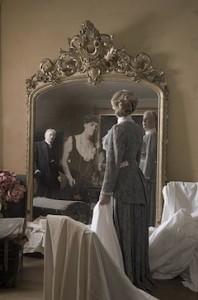 The Inner House is taken from Edith Wharton’s 1934 autobiography, A Backward Glance, and several of her private letters and poems. It begins with Wharton at five years old taking a walk with her father down “the old Fifth Avenue” in New York City, her earliest years of “making up” which sowed the seeds of her later writing career, her early unpreparedness for marriage to Teddy Wharton, her days at The Mount in Lenox, her unhappiness and divorce, her later affair with Morton Fullerton, her journey abroad, her assistance to France in The Great War, and loving descriptions of her close friends, mentors, and companions, including Henry James, Walter Berry, and Bernard Berenson.

Edith Wharton (1862-1937) was the author of The Age of Innocence, Ethan Frome, and The House of Mirth. She wrote over 40 books in 40 years, including authoritative works on architecture, gardens, interior design, and travel. Essentially self-educated, Wharton was the first woman awarded the Pulitzer Prize for Fiction, an honorary Doctorate of Letters from Yale University and a full membership in the American Academy of Arts and Letters.

The 150th Anniversary of Edith Wharton’s birth has led to lively discussion by modern novelists about Wharton’s life and writing this year. Jonathan Franzen’s essay in The New Yorker (“A Rooting Interest: Edith Wharton and the Problem of Sympathy,” February 13, 2012) and the response from writer Victoria Patterson in the Los Angeles Review of Books (“Not Pretty,” Feb 25, 2012), followed by others in the Daily Beast and Salon.com unleashed a firestorm of comments in the blogosphere about how women writers and their work are portrayed in the media.

“It’s fitting to celebrate Wharton’s birthday with an appearance from Wharton herself,” says Wharton Salon producing artistic director Catherine Taylor-Williams. “It will give patrons to The Mount a perfect context for visiting her home this summer, and I’m delighted to have Normi Noël on board to direct. We’re also very excited to join the Wharton birthday series at the New York Society Library in December and to perform in another beautiful building from Wharton’s time.”

In December, The Wharton Salon will bring The Inner House to New York City to The New York Society Library (NYSocLib) on E. 79th St. and Madison Ave. as part of the NYSocLib’s Wharton birthday events, the only performing arts group to join a year-long series that has included celebrated biographer Hermione Lee and a photographic exhibition called “Wharton’s New York City: A Backward Glance.”

Tickets to the Wharton Salon’s production of The Inner House at The Mount are $35 General Admission. Performances take place in The Stables Theatre at The Mount Wednesday to Friday at 5:30 pm and on weekends Saturday and Sunday at 3pm. For tickets and information go to The Wharton Salon or call 1.800.838.3006.

The Wharton Salon is a professional theatre company that performs the stories of novelist Edith Wharton and her contemporaries in site-specific locations, offering a unique intimacy between author, actor, and audience; and drawing connections between literature, architecture, and nature.

The Mount is a center for culture inspired by the passions and achievements of Edith Wharton. Designed and built by Wharton in 1902, the house embodies the principles outlined in her influential book, The Decoration of Houses (1897).  The property includes three acres of formal gardens designed by Wharton, who was also an authority on European landscape design, surrounded by extensive woodlands.  Programming at The Mount reflects Wharton’s core interests in the literary arts, interior design and decoration, garden and landscape design, and the art of living.