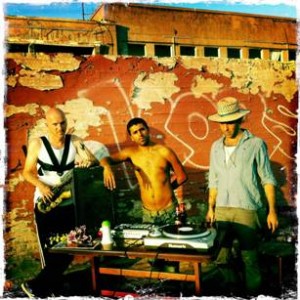 (NORTH ADAMS, Mass.) – Balkan Beat Box brings its eclectic and infectious mix of Balkan, Middle Eastern, hip-hop, electronica, punk and other musical stylings to MASS MoCA’s Hunter Center for what is likely to become a dance concert as soon as the first number kicks off on Saturday, March 16, 2013, at 8 pm. Founded by Israeli-born, now-Brooklyn-dwelling musicians Ori Kaplan and Tamir Muskat, and now including Tomer Yosef, Balkan Beat Box has built a reputation as a “global peacekeeping mission you can dance to,” according to SPIN. The New York Post recently warned concertgoers to “come prepared for a raucous night.”

Balkan Beat Box burst onto the New York City underground music scene in 2005 with a self-titled debut album that introduced the world to its mix of Balkan traditions, hip hop, and electronica. Kaplan and Muskat met in Brooklyn as teenagers, having grown up around music: Kaplan was a klezmer clarinetist and Muskat was a punk rock drummer. Together they created their own musical style fusing Balkan and Middle Eastern musical stylings with Gypsy punk, electronic, and hip hop beats. Balkan Beat Box also draws inspiration from Jamaican dub.

As a unit, the group often collaborates with a host of other musicians, both in the studio and onstage. Balkan Beat Box’s self-titled first album was released in 2005, and focuses mainly on Mediterranean sounds. Their follow-up release, 2007’s Nu Med, includes Arabic and Spanish influences. Both albums have received global acclaim. The Forward raves that the group boasts “finesse without a touch of self-confidence: the instruments include laptops and kitchen utensils, ancient Saharan dialects share the stage with neologisms… adventuresome.”

Balkan Beat Box hits the Hunter Center stage on Saturday, March 16, at 8 PM. Drinks from the MASS MoCA bar and dinner from Lickety Split will be available before and during the show. Tickets are $15 in advance, $19 on the day of the show, and $10 for students. MASS MoCA members receive a 10% discount. Tickets are available through the MASS MoCA Box Office, located off Marshall Street in North Adams, from 11 AM until 5 PM (closed Tuesdays). Tickets can also be charged by phone by calling 413.662.2111 during Box Office hours or purchased online at MASS MoCA.

MASS MoCA, the largest center for contemporary visual and performing arts in the United States, is located off Marshall Street in North Adams on a 13-acre campus of renovated 19th-century factory buildings.  MASS MoCA is an independent 501(c)(3) whose operations and programming are funded through admissions and commercial lease revenue, corporate and foundation grants, and individual philanthropy.  Except for an initial construction grant from the Commonwealth, and competitive program and operations grants from the National Endowment for the Arts and the Massachusetts Cultural Council, MASS MoCA is privately funded: 90% of annual operating revenues are from earned revenues, membership support, and private gifts and grants.