(ANNANDALE-on-HUDSON, N.Y.) – Writer Neil Gaiman and pop-rock cabaret artist Amanda Palmer must be one of the most charming and talented creative couples on the contemporary arts scene, based upon their winning, entertaining, and at times provocative husband-and-wife duo performance at Bard College’s Sosnoff Theatre on Saturday night, as part of the monthlong celebration of the 10th anniversary of the deservedly acclaimed Fisher Center for the Performing Arts.

The relatively unique “evening with” format provided a forum for the two to play off and with each other, as well as to go off for a time on their own solo ways. While on the surface, and perhaps below the surface, their respective work seems to have little if any connection to each other’s – Palmer herself summed it up as “his is all reason and mine is all emotion” – the mutual respect they accord each other is touching; their musical collaborations even more so; and the high level of virtuosity they each bring to their art simply stunning.

Gaiman being more the writer and Palmer the singer/musician, he mostly read and she mostly sang, accompanying herself variously on ukulele (an acquired taste I have yet to acquire) and piano (her playing is even more lush and dynamic in concert than on recording). 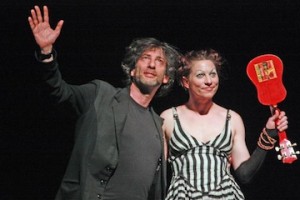 Gaiman offered a sampling of mostly new work in a variety of forms and genres, including short narrative pieces he called “poems,” stories that variously began as challenges he gave to himself or others gave to him, some drawing on his work in the fantasy realm and others touching on science fiction and life in his native England (one that began with the terrific opening line, “The Thames is a dirty beast”). He is an accessible reader and often funny. I always find it hard to follow readings, even of writers with whose work I’m familiar. I knew next to nothing about Gaiman’s work beforehand; I was able to follow and process virtually all of it, and it was an enjoyable ride altogether – and I take issue with his wife’s pigeonholing him as all intellect – in fact, some of his work, while perhaps rooted in ideas, is quite moving, emotionally so.

Palmer, with whose recorded work I’m quite well versed, fully comes to life in person. Her work is indeed full of passion and emotion, but it is also quite personal (at least one assumes it is, or at least it draws its power from the personal), and therefore all the more compelling when being invested with that power in the moment. Palmer is also a physical performer, and that added element – seated on her piano bench, she jumps up, her legs fly out to the sides and splay, her head is thrown back, it’s all so very dramatic but fully earned and seemingly organic – just enriches the entire experience, and songs including “The Killing Type,” “Ampersand” and “The Bed Song,” which should presumably lose their power once they become familiar, in fact were even stronger than before.

Gaiman was also an able performer, singing several numbers, some that he wrote, including “I Google You,” which he described as a torch song for the computer era, an irreverent Dudley Moore number, and a rendition of a Leon Payne song that could well have been the model for David Byrne’s “Psycho Killer” (Payne was the country songwriter responsible for the quintessential Hank Williams tune, “Lost Highway”). Gaiman and Palmer traded verses and phrases on a game version of “Makin’ Whoopee,” too.

True to its billing, the show had the relaxed quality of an evening hanging out with Neil and Amanda – they even had big cozy chairs with a side table in the center of the stage. They broke up the performance with a fun episode of “Ask Neil and Amanda,” reading questions for each other submitted by audience members. Their banter was clever and funny and cute, and they came across as brimming with ideas and creativity. In this manner they were truly inspirational, undoubtedly for the many students at Bard in the audience (including some lucky ones who studied writing with Gaiman during the previous week) as well as for all others in the crowd. They pretty much put that up to those in attendance as a challenge, without directly saying so – to be creative, in whatever manner you can, every day of your life. And if you can do so, share it, with a creative partner, than all’s the better.