(PITTSFIELD, Mass.) – “Only those who cry out for the Jews may sing the Gregorian chant,” says the pastor of First Church of Christ in Pittsfield, the Reverend Dr. James Lumsden, recalling the prophetic words of World War II martyr Dietrich Bonhoeffer.  On Sunday, April 14, 2013, at 10:30 am, First Church of Christ on Park Square in Pittsfield will honor the cries of the forgotten by marking Holocaust Remembrance Day.  Candles will be lit to remember the six million Jews as well as the countless others who were executed, music, prayers and silence will be shared, and Pastor Lumsden will address the congregation in a Holocaust Remembrance message.

“Too often the contemporary Church tries to pretend that Jesus wasn’t a Jew,” says Lumsden. “We cut ourselves off from suffering of the world and try to peddle spiritual sentimentality instead of God’s peace that passes understanding.” 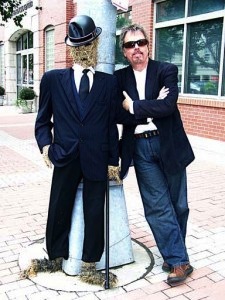 Pastor Lumsden noted:  “As Christians who bear a unique responsibility for the anti-Semitism that gave rise to Hitler and the death camps, we must always remember the Holocaust – and join our voices in solidarity with all the wounded of the world – especially now that more and more concentration camp survivors are dying and religious intolerance is on the rise.”

Holocaust Remembrance Day – April 8th – marked the 70th anniversary of the Jewish uprising against the Nazis in the Warsaw Ghetto.  Using readings from the Holy Scriptures as well as secular writers like Anne Frank, this gathering invites the community to never forget how the horror of the Holocaust came to pass.

First Church of Christ on Park Square is the first congregation in Pittsfield and was formed in 1747.  It has a history of community involvement and inter-faith reconciliation.  Worship begins at 10:30 am.