(HUDSON, N.Y.) – Local author Koethi Zan will celebrate her debut thriller, The Never List, with a reading and book signing at the Spotty Dog tonight (Thursday, July 25, 2013) at 7 pm. The Never List is a work of psychological suspense and terror that has been compared to books by Karin Slaughter, Laura Lippman, and S.J. Watson as well as Thomas Harris’ Silence of the Lambs.

For years, best friends Sarah and Jennifer kept what they called the Never List:  a list of actions to be avoided, for safety’s sake, at all costs.  But one night, against their best instincts, they accept a cab ride with grave, everlasting consequences. For the next three years, they are held captive with two other girls in a dungeon-like cellar by a connoisseur of sadism.

Ten years later, at thirty-one, Sarah is still struggling to resume a normal life, living as a virtual recluse under a new name, unable to come to grips with the fact that Jennifer didn’t make it out of that cellar. Now, her abductor is up for parole and Sarah can no longer ignore the twisted letters he sends from jail. Finally, Sarah decides to confront her phobias and the other survivors — who hold their own deep grudges against her. When she goes on a cross-country chase that takes her into the dark world of BDSM, secret cults, and the arcane study of torture, she begins unraveling a mystery more horrifying than even she could have imagined. Sarah must ultimately move through her own terror to protect and preserve herself — and others. 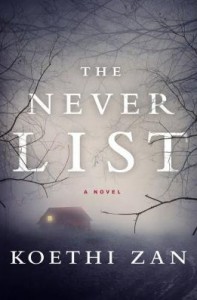 Koethi Zan was born and raised in rural Alabama, then moved to New York City after earning a J.D. from Yale Law School. She practiced entertainment law for more than fifteen years, working in film, television, and theater, and most recently at MTV.  Zan now lives in an old farmhouse in upstate New York with her husband and two daughters.