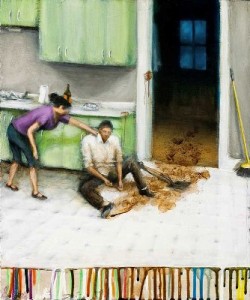 (HUDSON, N.Y.) – The Man Show, a group exhibition exploring aspects of masculinity through nine contemporary artists, will be on view at Carrie Haddad Gallery from Thursday, August 15 through Sunday, September 15, 2013, with an artist’s reception on Saturday, August 17, from 6 to 8pm. There will be a talk by several of the artists in the show preceding the reception from 5 to 6pm. Artists represented include David Konigsberg, Allan Skriloff, Joseph Heidecker, Mark Beard, David Austin, Robert Flynt, Jacob Fossum, David Paulson and Darshan Russell.

Allan Skriloff, David Austin and Darshan Russell paint scenes from fantasized realities, unique windows through which they objectify their subjects. Skriloff’s paintings present men at work on an oil rig, exposing the sensuality found within the dirt, grime and sweat the men exude. Large biceps are perceived as trophies and varying angles further empower his men as masters of their universe. In his last show at the gallery, David Austin presented a super virile, “Daniel Craig-esque” type of man. In this exhibit, however, he presents men as more vulnerable and far less sure of themselves – evoking our sympathy and understanding far more than our admiration and awe. Darshan Russell, the sole woman in the show, profiles men in much of her figurative work. Painting from photographs she has taken or found in the Poughkeepsie Journal, the men are depicted in her seemingly naïve style.

David Paulson and David Konigsberg approach the subject from two very different directions, yet both lend a highly nuanced and sensitive expression to their male characters. Paulson, a self-described formalist, takes a more abstract, cubist approach, following in the path of painters like De Kooning. He does not know in advance whether his subjects will turn out to be male or female — that is determined through the process. Facial and other attributes remain fluid and undefined; the eyes, however, become a focal point, defining character, purpose, and powerful emotion. David Konigsberg, by contrast, relies on narrative in a series of paintings that are suggestive, more than anything, of a collection of short stories. While this painter’s work often leans toward the fantastical, whether in choreographed characters flowing across the landscape or sailing above the earth in flying machines, this current series offers a return to recognizable aspects of life — men captured in quiet, personal moments and more domestic pursuits. 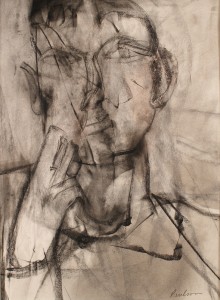 Mark Beard is a pop culture artist who explores sexuality and studies the male physique under the pretense of a different time and era. Beard has invented six different personas through which to express the many facets of his talent. The most prominent, Bruce Sergeant, is inspired by George Bellows and John Singer Sergeant. He produces one beautiful man after the next in a star stunning light. Often times, the characters end up in compromising athletic positions while wrestling or boxing. His collective work that is now plastered on a large scale in Abercrombie & Fitch flagship stores around the world bring the meaning of “eye candy” to a whole new level.

Jacob Fossum’s realism blatantly places the viewer in the 21st century while illuminating a similar subject. This artist finds no need to hide behind the era of another time in order to express his interest in homoerotic social media coupled with serious disdain for organized religion. Raised in the Church of the Latter Day Saints, Fossum’s portraits are of homosexual men who are taking photographs of themselves for a gay hook up website. Ironically, Fossum has his subjects posing in the Holy of Holies, which is the Mormon’s sacred room in the Salt Lake Temple. Digital pixilations are etched into the portraits along with the presence of cell phones, reminding us that this continues to be considered a social faux-pas in modern day society.

Robert Flynt and Joseph Heidecker are two artists who use found photographs to make social commentary about male identities, both physically and emotionally. Flynt’s unique photographs place the body in a variety of found contextual material: medical, art historical, musical. The intention is that these sources — and their associations of heroic ideals, sentimentality, gender presumptions — in conjunction with the photographed figures, will subvert conventional notions of masculinity. Both the original and found images hone a dissonance of what is perceived and interpreted as truth. Joseph Heidecker takes a similar approach using found images to debunk history’s image of what is considered masculine. Portraits of men in corporate roles and as sports icons are embellished with needlework alterations of embroidery and beadwork. Heidecker begs to ask the question “which is the real mask – the purple beads covering his glasses or the three piece business suit?”