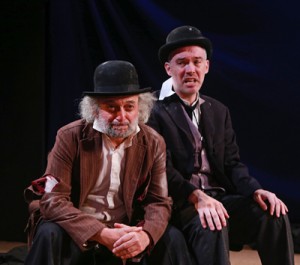 (NEW YORK, N.Y.) – How can a play that one has seen and read numerous times in English translation – a play that is dense with allusions but a play in which, as the playwright has the actors say repeatedly, nothing happens, a play that resists and defies meaning, interpretation and analysis – turn out to make more “sense” to a viewer when it is performed in a foreign language

That is precisely the case in the production being given of Samuel Beckett’s “Waiting for Godot” at the Castillo Theatre (through October 13), newly translated into Yiddish by Shane Baker. This staging of Godot is nothing short of revelatory. Merely by speaking Beckett’s lines in Yiddish, with only the faintest hint otherwise that the “action,” so to speak, is being played out in a specific post-Holocaust landscape (concentration camp stripes poke out from the undergarments of one character; another seemingly is wearing camp pants), the play takes on entirely new resonance. 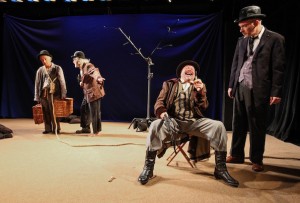 Some may find this a violation of Beckett’s intent – whatever that was, and however that could be measured. But artists’ intentions were tossed out of the interpretive window forty-odd years ago (thank you, Jacques Derrida). A play is nothing without staging and interpretation, and even less without an audience to make sense of it somehow. Nothing has been imposed upon this play in this production that isn’t already there, any more than the English translation of the work, written originally in French by an Irishman living in Paris, makes it more American or English.

So if Beckett wasn’t consciously mindful of the fact that phrases like “Hand in hand from the top of the Eiffel Tower, among the first. We were respectable in those days. Now it’s too late. They wouldn’t even let us up” and “I remember the maps of the Holy Land. Coloured they were. Very pretty. The Dead Sea was pale blue. The very look of it made me thirsty. That’s where we’ll go, I used to say, that’s where we’ll go for our honeymoon. We’ll swim. We’ll be happy.”

and, in particular, this exchange between Vladimir and Estragon:

Where are all these corpses from?

We must have thought a little.

At the very beginning.

resonate in the wake of the destruction of European Jewry – in spite of the fact that in an early draft, Estragon was named Levy (one of the most Jewish of all Jewish names, going all the way back to Biblical times, as the name of one of the original Ten Tribes of Israel) – it’s not to be discounted that in this context, the play is actually elevated into a work of transcendence. Suddenly all the savior- and Christ-talk in the play takes on new implications; the talk of daily beatings and immense suffering is given concrete import; and all this miserable waiting becomes all the more tragic. Nobody creates great art to be purposely abstract; everything is grounded in some sort of human impulse, thought, reality, feeling or desire.

Not that Godot hasn’t previously been read as a stand-in for God or a Messiah figure; he certainly has. Just that here, the stakes are more imperative, the past is immediately present, the forlorn need that much greater. It becomes an impossibly spiritual drama.

And the comedy, too, in this very comic work of art, takes on the fabric and patina of classic Jewish humor. The characters in the play have always told jokes – it’s written into the script. Now the jokes are seemingly right out of Woody Allen or Larry David.

None of this would work had not the production itself been less than perfect – and perfect it is. The natural, organic quality of the minimalist production (directed deftly by Moshe Yassur), and the brilliant acting is all in service of the text (not being a Yiddish speaker, I cannot attest to the performers’ Yiddish delivery nor to the fidelity of the translators’ work – but at least, to a non-Yiddish speaker, none of this matters) and, oddly enough, the action. As it turns out, there is plenty of it, in spite of Beckett’s playful teasing of himself, his characters and the audience that it is a play — foreshadowing the TV comedy “Seinfeld” — in which nothing happens (other than waiting).

The actors fully embody their roles and are utterly convincing in their relationships to each other (and in portraying themselves as thinking in Yiddish). David Mandelbaum, in particular, is the very embodiment of the long-suffering Estragon. Shane Baker, who also translated the work into Yiddish, is right there with Mandelbaum every step of the way, his Vladimir always trying to prop up a defeated Estragon, Didi’s glass-half-full to Gogo’s glass-half-empty.

Avi Hoffman and Rafael Goldwaser are also terrific as Pozzo and Lucky, respectively, and Goldwaser delivers Lucky’s monologue, one of the greatest such set pieces in the history of written theater, with delirious authority.

Several times during the second act, the supertitles (they are provided in English and Russian) went out of sync with the actors – or vice versa. This was actually a boon to the production. Freed from the temptation to read every line of translation as it was being spoken and thereby taking my eyes off the stage, I just sat back and watched the actors go at it. It didn’t matter that I hardly understood anything they were literally saying, beyond the occasional “vartn af godot.” Their acting said it all.

The magic and delirium didn’t end there. Just the fact that “Waiting for Godot” is being performed in Yiddish in 2013 in midtown Manhattan in the theater district is, in some ridiculously circular way, very much the answer to the question posed by the play itself.