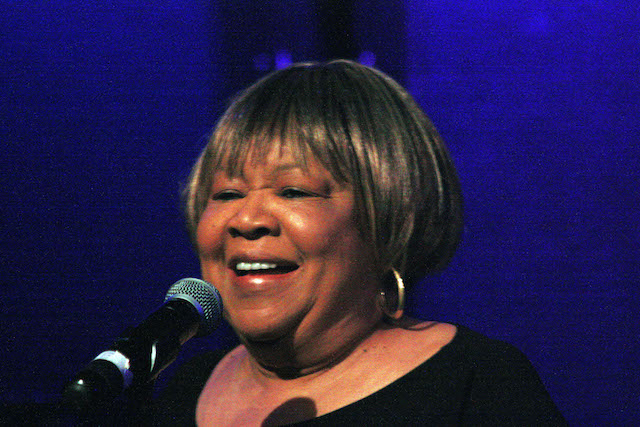 (HUDSON, N.Y.) – “I done reach the point where I wanna be real,” Mavis Staples sang at one point in her triumphant concert at Club Helsinki Hudson on Sunday night, and not a soul in the standing-room-only house doubted her for a second. Though struggling with what appeared to be a chest cold, the 75-year-old soul singer gave it her all, which was tons more than you’re likely to get from the average singer one-third her age.

While Staples comes dressed in so much history – all that attached to the family group from which she emerged, the Staple Singers, including the front lines of the Civil Rights Movement of the 1960s (mentioning the now-famous-again march from Selma to Montgomery at one point, she said “I was there, and I’m still here. I’m a living witness!”) – this was no exercise in nostalgia or riding on coattails or feel-good folk-protest kumbaya. From the outset, this was a gospel-infused R&B show, and with the aid of her anonymous yet versatile and tight power trio, Staples took listeners on a journey throughout her legendary career as well as the music of the past 65 years. And she made it so funky it was nearly a dance concert, too.

In her hands, “Keep Your Eyes on the Prize” was swampy R&B, which worked perfectly as she segued into the Talking Heads’ “Slippery People,” finding the politics in David Byrne’s lyrics while at the same time making it even more funky – and even out-Byrning Byrne with the song’s gibberish lyrics – call it scat-singing – at the end. Plus give her trio credit for kicking this new-wave-funk favorite into the stratosphere.

Other highlights were her version of “The Weight” by The Band, which she dedicated to Levon Helm (even though the song was written by Robbie Robertson). Ever since the version performed by the Staples Singers in the film version of “The Last Waltz,” the tune has been owned by Staples, and again, she and her band didn’t disappoint, as they didn’t either on “You’re Not Alone,” the Jeff Tweedy-penned title track to her recent Grammy Award-winning album of the same name, a soulful, minor-key alt-country ballad.

Funky spiritual numbers interspersed these tunes, and while Staples had to take her own intermission to recover her breath and strength while her band played some instrumental tunes, she brought it all home with a rendition of “Wade on the Water” and the Staple Singers’ 1970 hit, “I’ll Take You There,” with all the funk and charisma of James Brown.

It was a rare chance to see a living legend who usually performs in large concert halls and theaters in the intimate confines of a nightclub, which made it all the more real.