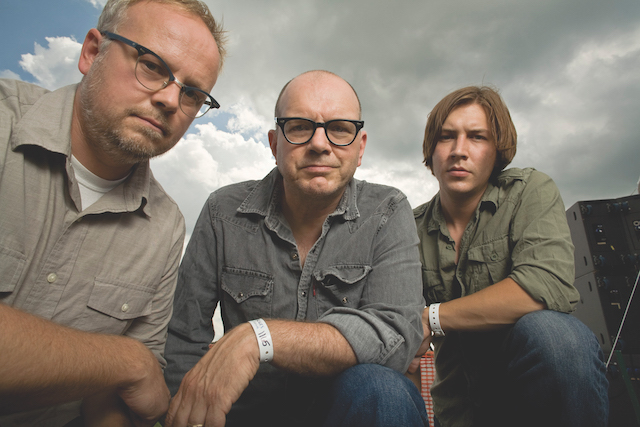 Before there were blues-rock revivalists like White Stripes and Black Keys, there was Tarbox Ramblers, digging deep into the place where Appalachian music, ancient blues, and gospel come together in powerful, unexpected combinations. NPR described their sound as “Homemade rock ‘n’ roll with a dose of rattlesnake venom and gospel-drenched howling,” while I wrote, “The music is evocative of a world gone by and a world gone wrong, but also a world that lingers on into the 21st century.”

Tarbox Ramblers – string bassist Scott McEwen, drummer Robby Cosenza, and guitarist-vocalist Michael Tarbox – play old-soul music, including both original songs and arrangements of songs dating back to the 19th century or before – songs like “St. James Infirmary,” “Jack of Diamonds” and “The Cuckoo.”

Michael Tarbox’s own songs reflect and expand on the music he’s absorbed from traditional and rock influences that include Skip James, Bert Jansch and Lou Reed. Authors from The American South, like Flannery O’Connor, have also influenced his writing. Tarbox is an inventive guitarist with a distinctive barbed-wire sound; he also plays in a gospel-infused slide guitar style. He’s also a smoky-voiced singer whose sound melds Appalachian folk, backwater blues and gospel in an exciting, visceral take on American music.

The Ramblers play these songs with freshness and immediacy, highlighting their hopes, tragedies, and otherworldiness in a rough-hewn, uninhibited style that engages audiences wherever he plays.

In a 2004 review, I wrote, “Railyards, brakemen, graves, muddy highways, horsehoes, and thieves are the iconic imagery of old blues and folk songs. So when you take a first listen to Tarbox Ramblers’ haunting new album, ‘A Fix Back East’ (Rounder), you can be forgiven for assuming that most of the songs go back decades, especially given the group’s raw, primitive sound and Michael Tarbox’s ghostly vocals. But in fact, most of the songs on “A Fix Back East,” the follow-up to the group’s eponymous debut, were written very recently by leader Michael Tarbox.”

“The result is a subtle blend of old-time blues and garage rock – stripped-down, minimalist, punk-inflected roots music that is not entirely unlike what better-known bands like the White Stripes are doing these days. In the case of Tarbox Ramblers, the music is evocative of a world gone by and a world gone wrong, but also a world that lingers on into the 21st century. Some things never change, and hell, damnation, and hangovers, along with love and transcendence – all of life’s essentials — are just the same today as they were 80 years ago.”

“What makes them so immediate and brings them to life on ‘A Fix Back East’ are Tarbox’s vocals – a cross between Robert Johnson at the crossroads and Bob Dylan 20 miles out of town and cold irons bound – and the stark purity of the music, which consists mostly just of guitar, string bass, drums and an occasional fiddle.”

Don’t miss Tarbox Ramblers uniquely raw, stark, minimalist take on what we now call Americana, but what used to simply be the sound of rural America.
For reservations in The Restaurant or in the club call 518.828.4800.