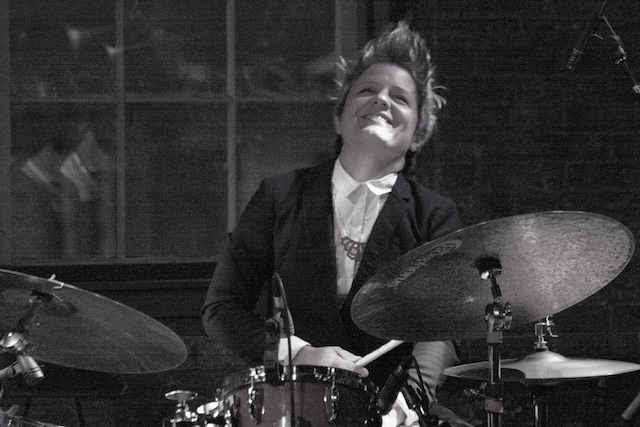 (NORTH ADAMS, Mass.) – Successfully straddling the fine line where the avant-garde meets the accessible is nothing short of a magic trick, unless your name is Allison Miller and your band is her all-star group, Boom Tic Boom!, and your musicians include avatars of the downtown sound including pianist Myra Melford, violinist Jenny Scheinman, clarinetist Ben Golberg, cornetist Kurt Knuffke, and bassist Todd Sickafoose.

And of course such an ensemble doesn’t belong anywhere as much as Club B-10 in MASS MoCA, where it played its singular brand of contemporary improvisational art music, corresponding to the visual art in the cultural laboratory’s galleries, on Saturday, May 7.

Miller is bandleader, composer, and drummer extraordinaire, and all three elements combined to make for a stunning performance by her all-acoustic sextet. That the whole was more than the sum of its parts was truly amazing, but somehow, while each player was featured at various moments throughout the evening – in each case exercising dazzling virtuosity while remaining in the service of Miller’s composition – the overall impact was of a unified whole, a band devoted to the music, music that was made for the particular voices in the band.

Miller’s compositional tools know no bounds, and the music ranged widely from classical to Ellingtonian, from Parker to Coltrane to Davis and far beyond, with station stops in funk, Latin, rock, and sometimes all in a single number. There was seemingly nothing the composer couldn’t do nor the band couldn’t play. I bet they could even play the damndest wedding you ever did see, and I mean that entirely as a compliment.
This was also one of the seemingly happiest jazz ensembles you’re likely ever to see, no one more so than Miller, whose smile beamed throughout in response to what her players gave to the music. There was no self-indulgence on display, even though if anyone deserved to indulge a little, it would be any of these soloists, so accomplished are each. 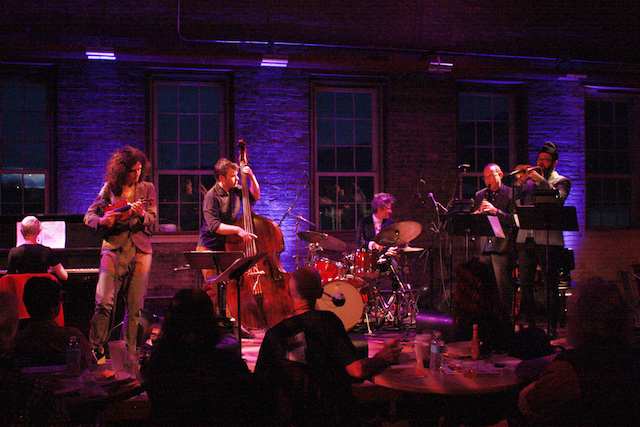 Yet this was to be a group effort, even as Myra Melford would seemingly sing through her piano, attacking it as if it were a drum kit, making her acoustic upright ring and chime like you’ve never before heard.

On “High T,” dedicated to Toshi Reagon, with whom Miller worked on the Reagon/Dorrance Dance collaboration, “The Blues Project,” Miller explored the midway point between bebop and hip-hop. On “Slow Jam,” all the soloists explored as well as played their instruments, in particular finding the quietest ways of wringing from them unconventional sonorities, all within the Miller’s gorgeous harmonic latticework underpinned by a simple rhythmic pulse laid down by Sickafoose.

“Hoarding the Pod,” inspired by a coffee machine, percolated to a highly caffeinated groove and bubbly melody, while “Shimmer,” a musical rendition of a scuba dive in the Philippines, featured a fabulous Gypsy/Moroccan solo by Jenny Scheinman on violin.

Further differentiating Miller’s approach from similar efforts, most numbers seemed to come and go in a matter of five or six minutes or so, a refreshing departure from jazz shows that challenge listeners merely by the length of their selections. Simply by imposing this time limit on herself, her compositions, and her ensemble, Miller found another formal way to deliver challenging, experimental music in an accessible manner – and in this case, accessible is no dirty word. This wasn’t “lite jazz” or easy listening by any stretch, but what it was was gorgeous, conversational instrumental music, full of surprise, beauty, harmony, virtuosity, and with the immediate, visceral impact of the Beatles.