Hudson Valley-based alt-rock singer-songwriter Jessie Lee Montague recorded several albums and performed widely around the region and in New York City in the late 1990s and early 2000s under the band name Jake. After a decade-plus hiatus from performing and recording, Montague is back with a terrific new album, Unhooked, which revisits songs she wrote and recorded as Jake in new, contemporary settings, backed by a fierce power trio including Desiree Williams on bass and Nick Parker on drums. With their funky, electronic arrangements emphasizing groove and Montague’s sultry, alluring vocals as well as her painterly guitar, soulful songs like “Trouble” and “Cowboy” are as likely to appeal to fans of Janelle Monae as they once might have attracted those partial to U2 and Chrissie Hynde.

Proof of Jessie Lee Montague’s staying power comes in a new rendition of her song, “Miracle,” a blistering, yearning hard-rock hymn as urgent today as it was when she first recorded it two decades ago. Jessie Lee also revisits a couple of cover tunes that she first recorded with Jake. 10CC’s “I’m Not in Love” is given a bass-heavy treatment – kudos to Desiree Williams for powering this and other tunes – atop which Jessie Lee’s dreamy vocals soar and her guitar power chords crunch, taking the track into Led Zeppelin territory. Montague also revisits Shuggie Otis’s psychedelic funk gem, “Strawberry Letter #23,” a nod to one of her most important musical influences. 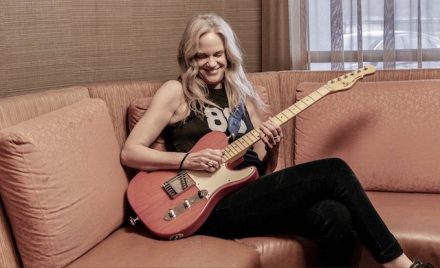 Several of the songs on Unhooked, including the dark ballad “Heaven,” are produced by Grammy Award-winner Malcolm Burn, a protégé of Daniel Lanois whose credits include work with Bob Dylan, the Neville Brothers, Patti Smith, and Emmylou Harris. Burn has an intuitive understanding of Montague’s strengths and influences and finds a way to spotlight and support them without imposing extraneous musical touches. This is Jessie Lee Montague music, through and through.

News is that Montague is currently at work with Malcolm Burn on a follow-up album that will feature all new material. Count us as eager and first in line to hear that one.